Let’s start with the engagement… 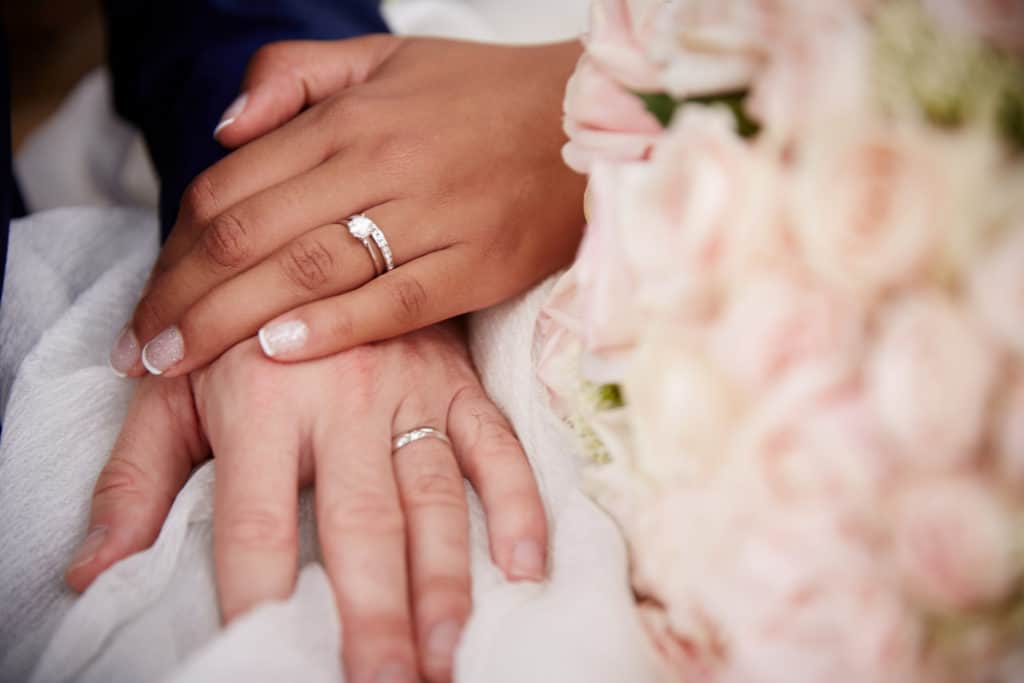 “It happened on Saturday 13th February 2013. I had gone to work and was due to finish at 3.00pm. Ben had planned to lay rose petals from the front door leading to an envelope with a message asking me to marry him, then more petals leading to the living room where he would be on one knee awaiting my answer. I didn’t want a planned surprised proposal and nothing out in public, so our beautiful home was an ideal location.Unfortunately, I finished work an hour early almost ruining the surprise! It didn’t happen as Ben had planned but I was completely taken aback when he called me out from the bedroom to him standing with a single red rose and the envelope with a loving message followed by the big question. We celebrated with sushi and a cup of tea before driving round to my mums to tell her the good news!” 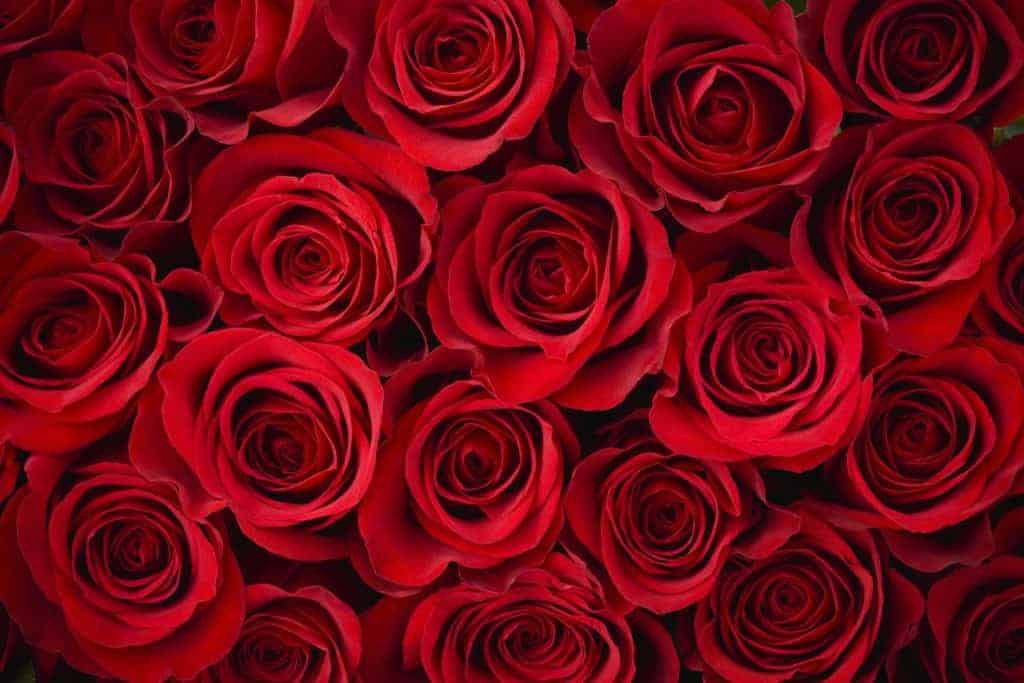 As soon as that ring is on your finger you will get the urge to find your dream venue. Ben and Andrea booked Leez Priory for their wedding only 8 days after the proposal!

“The same night we got engaged, my mum and I had started to google venues. The next day, we had appointments booked with a couple of different venues for the following week. We wanted a venue with history and wow factor but also somewhere our guests could relax and feel at home” 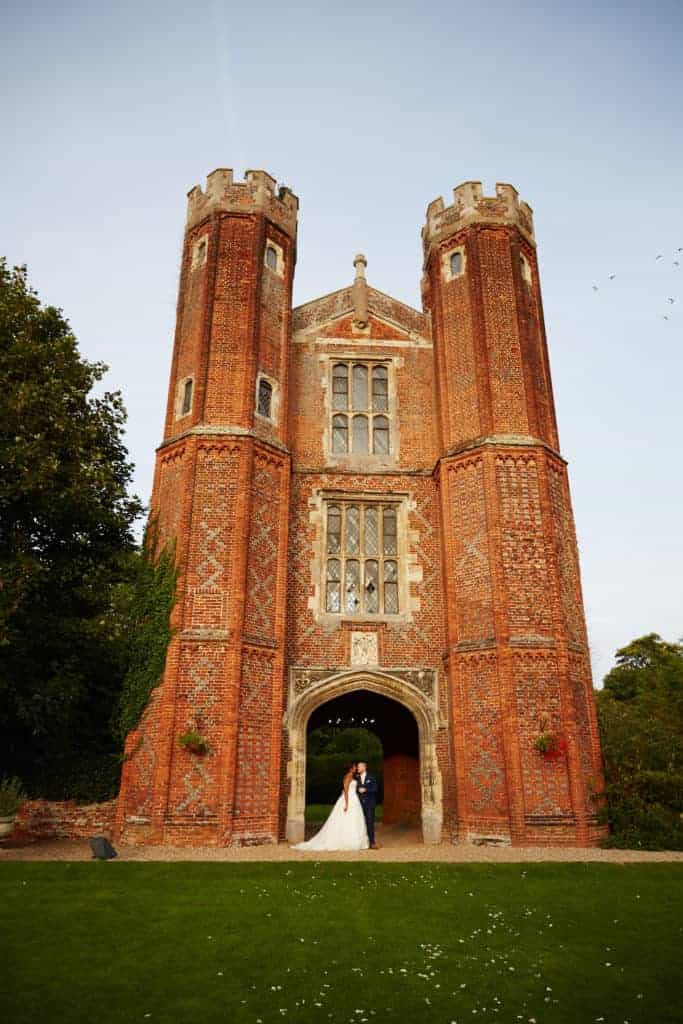 After arriving at Leez both Ben and Andrea knew this was where their dream wedding would be.

“When we drove up to Leez Priory we got goose bumps and couldn’t wait to get out the car and explore. My initial response was just ‘WOW’ the more we looked around the more I could see us having our day there. Leez Priory is a beautiful building full of history and character which was what we wanted in a venue but was also welcoming and relaxing. The outdoor space was perfect for our friends and family to mingle and explore. Also, it had enough space for the younger members to run around safely. The onsite accommodation was a big factor as we wanted main members of our family to spend as much time as possible with us. The breakfast the next morning brought everyone together to reflect on our perfect day”

After they booked the venue, the planning began…

“I used Pinterest, Instagram and Facebook for ideas. I signed up to Hitched for their wedding planning tools as they had a great checklist that could be used as a pointer for when to have things done by. After speaking with friends and family we knew the biggest single expense would be the venue followed by photographer. We set aside the biggest part of the budget for both. Everything else we asked each other if we really wanted to spend money on that item or use the money for something more important to us. Leez Priory was such a beautiful backdrop for our day that we spent very little on decoration and used the money for garden games which were enjoyed by everyone” 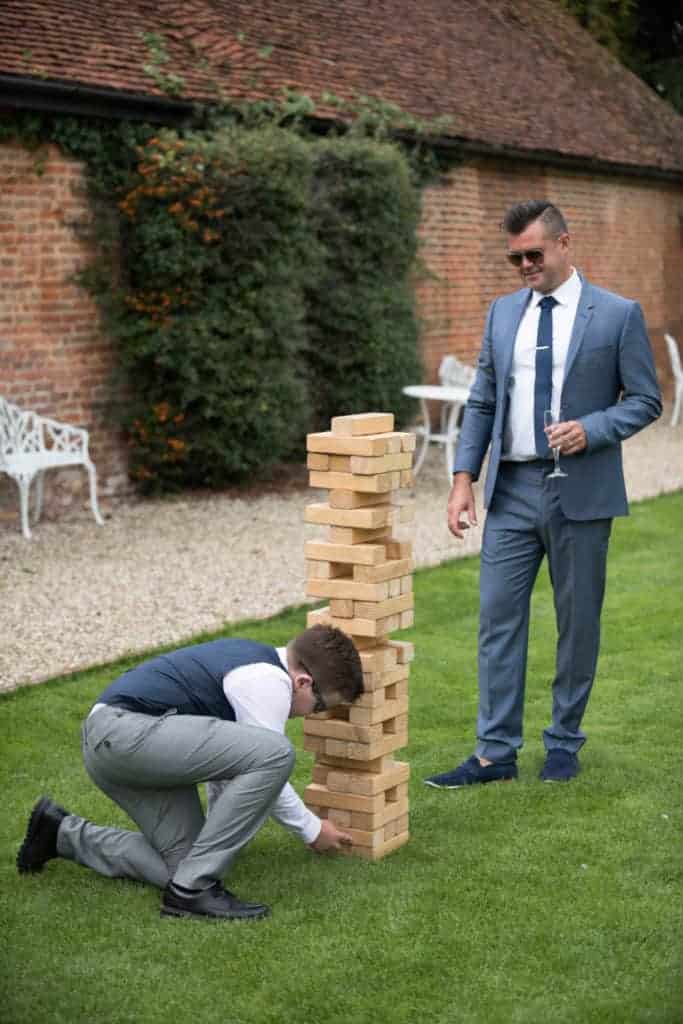 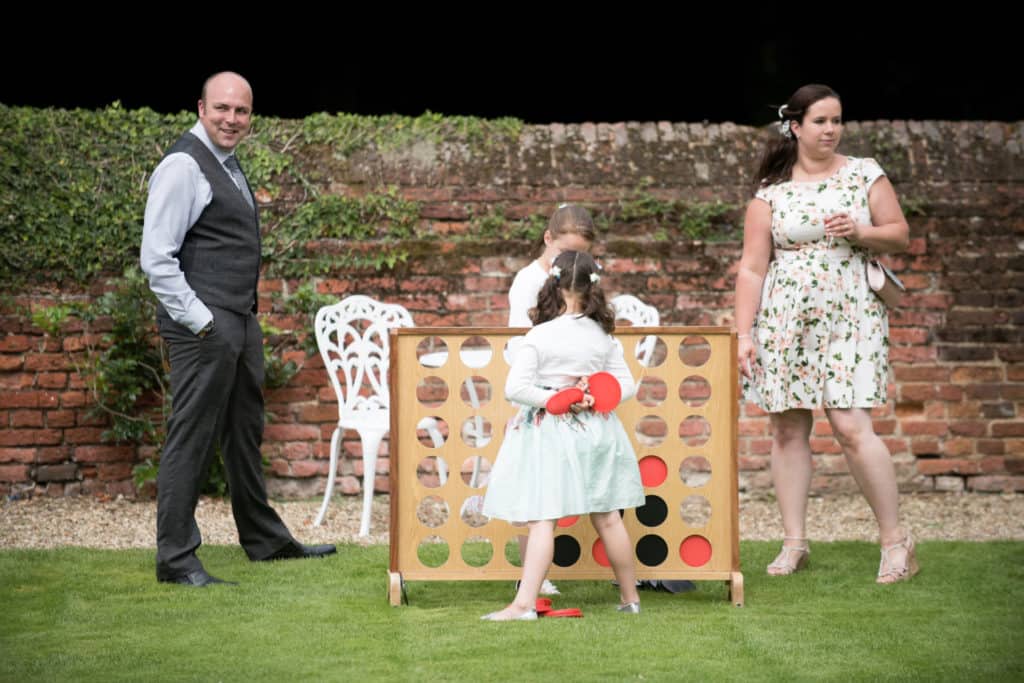 Andrea had helped to plan her Aunts wedding in the past which had hugely inspired her. As a Disney fan Andrea always remembers telling her Mum that she would like a ‘Scarlett O’Hara’ style wedding dress! However as Andrea got old so did the idea of the dress. However she did incorporate the Disney theme when it came to choosing her shoes… 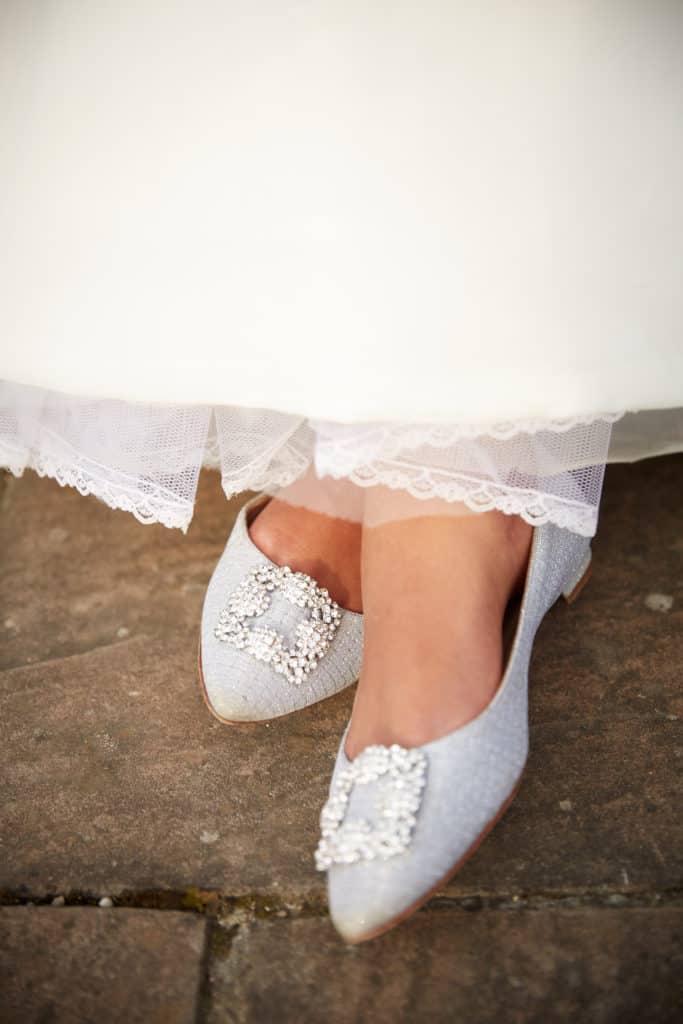 “Ben is slightly shorter than me, so I knew I was going to wear flat shoes. As mum treated me to my wedding dress I decided to buy the ultimate shoes from Manolo Blahnik. They were my nod to Cinderella and were surprisingly comfortable. I never told Ben how much they cost”

The 24th August came around and the sun was shining allowing Ben and Andrea to have their ceremony outside under the stunning Tower.

“Our ceremony was full of smiles and laughter. I walked down the aisle to Wings by Birdy with my Dad. Part of my attraction to having an outdoor ceremony at Leez was the length of the aisle. Thank goodness my Dad walked me down because the nerves kicked in and the aisle became a tearful marathon! We had two readings, He’s not Perfect by Bob Marley read by my Aunt Jackie and Pam Ayres He never leaves the toilet seat up read by Ben’s Uncle Scott. Both readings were full of love but were also playful. We had music played as we were signing the register and walking back down the aisle. Ben and I chose all the songs which was difficult as we have very different tastes in music” 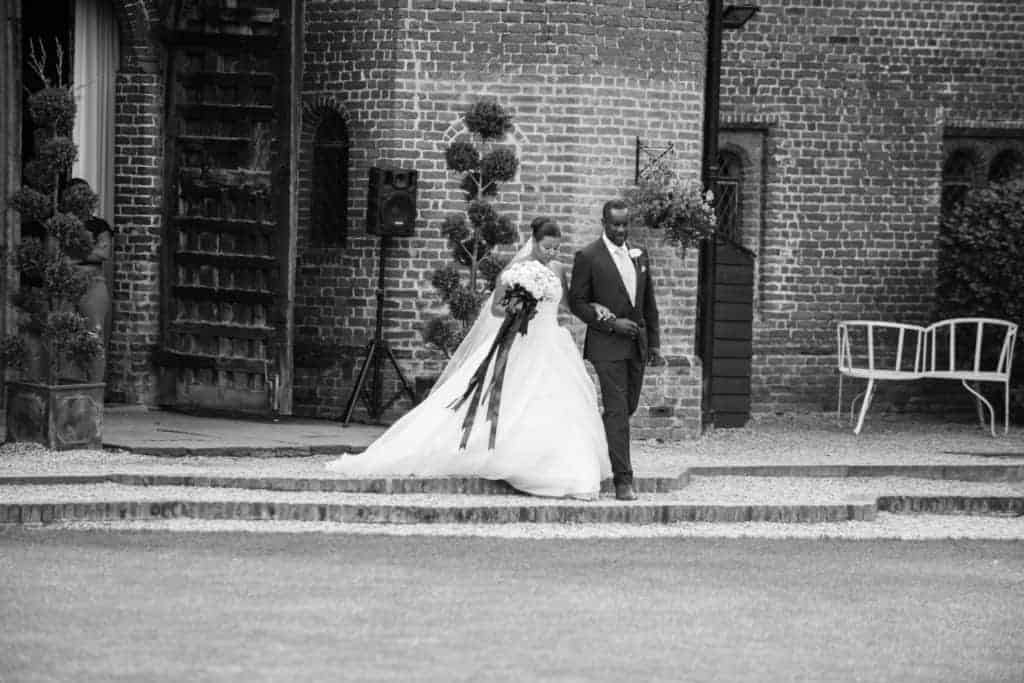 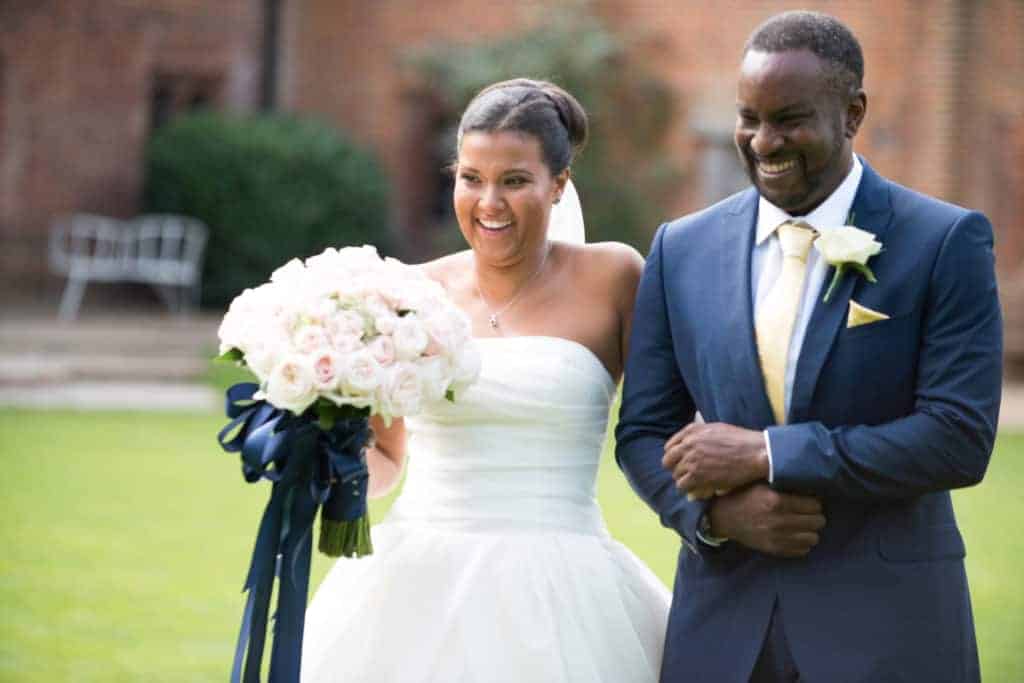 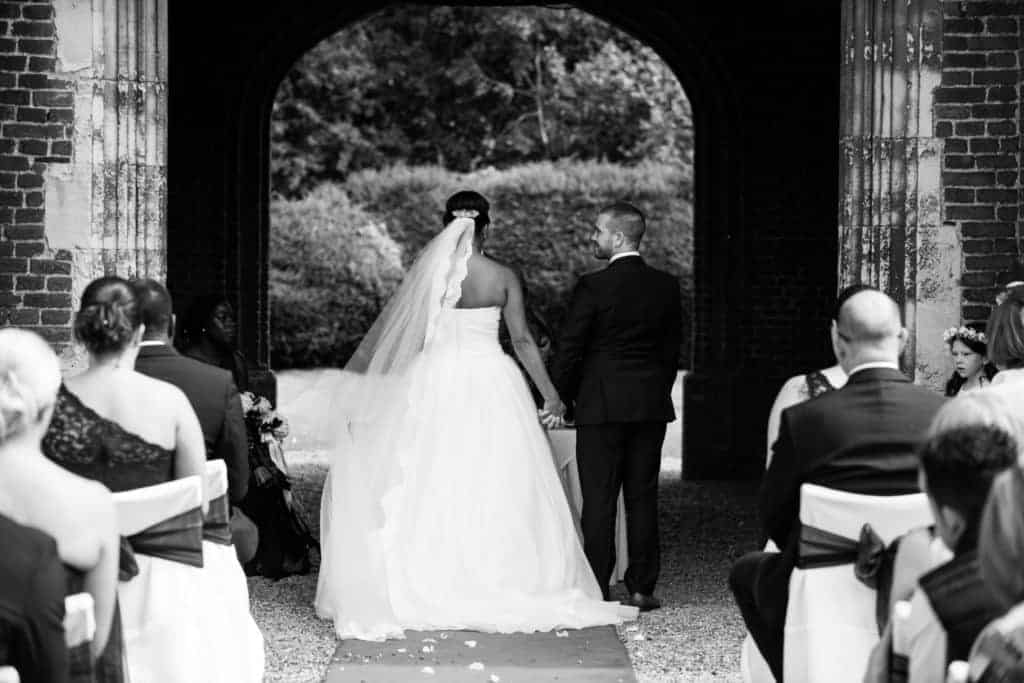 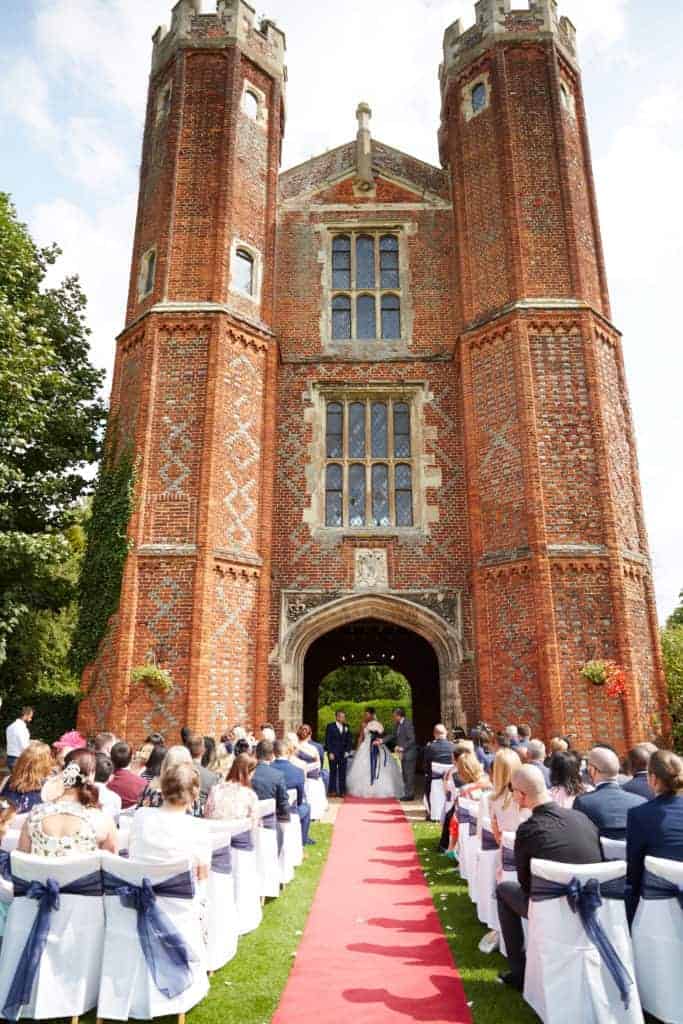 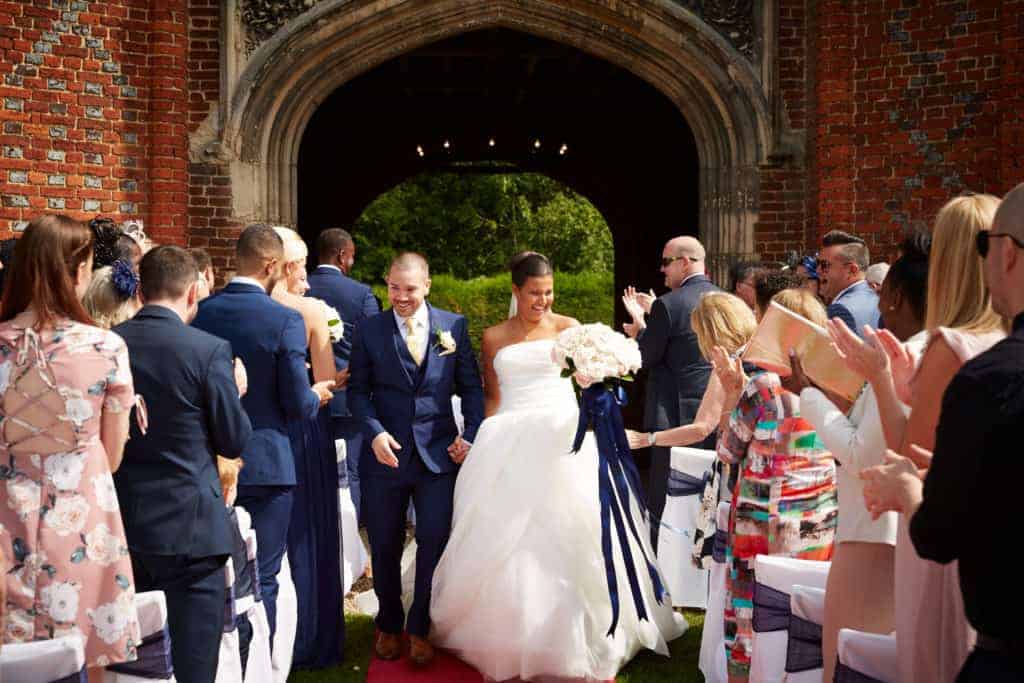 The drinks reception was an ideal time for mingling and catching up with relatives who they had not yet had a chance to say hello to. They decided to add on the garden games package to entertains their guests.

Ben, Andrea and their wedding party were greeted with an selection of canapes and welcome drinks. They chose: 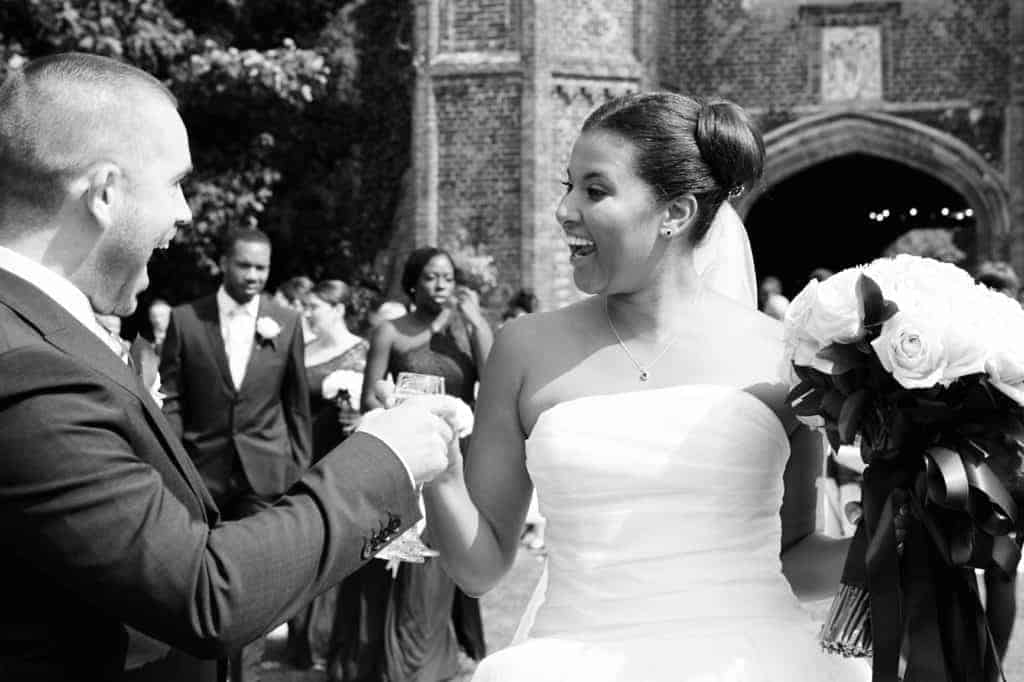 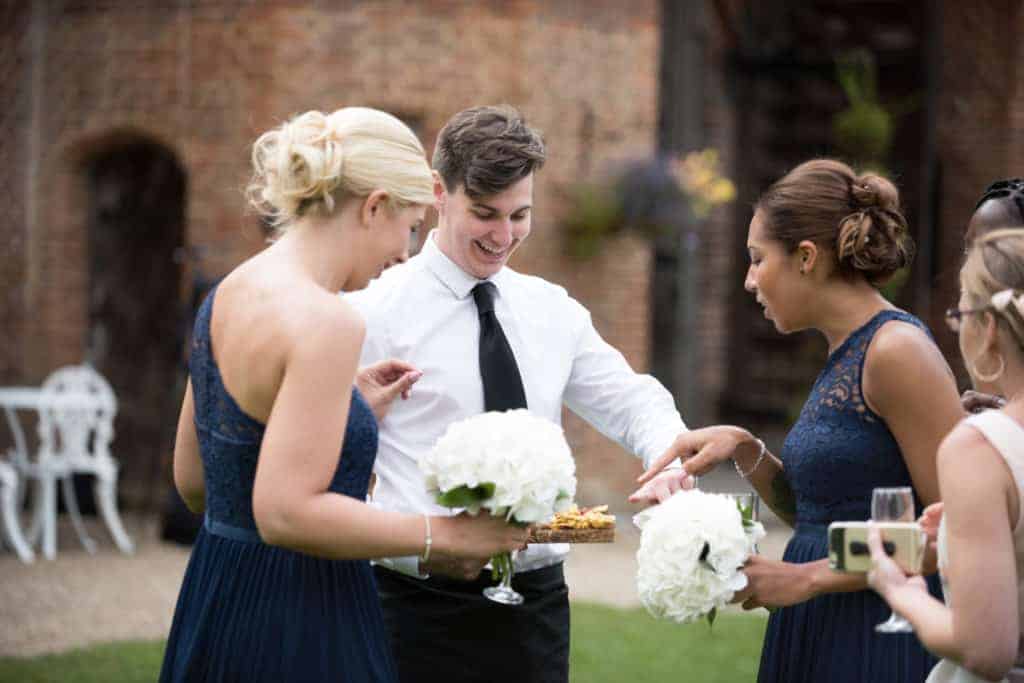 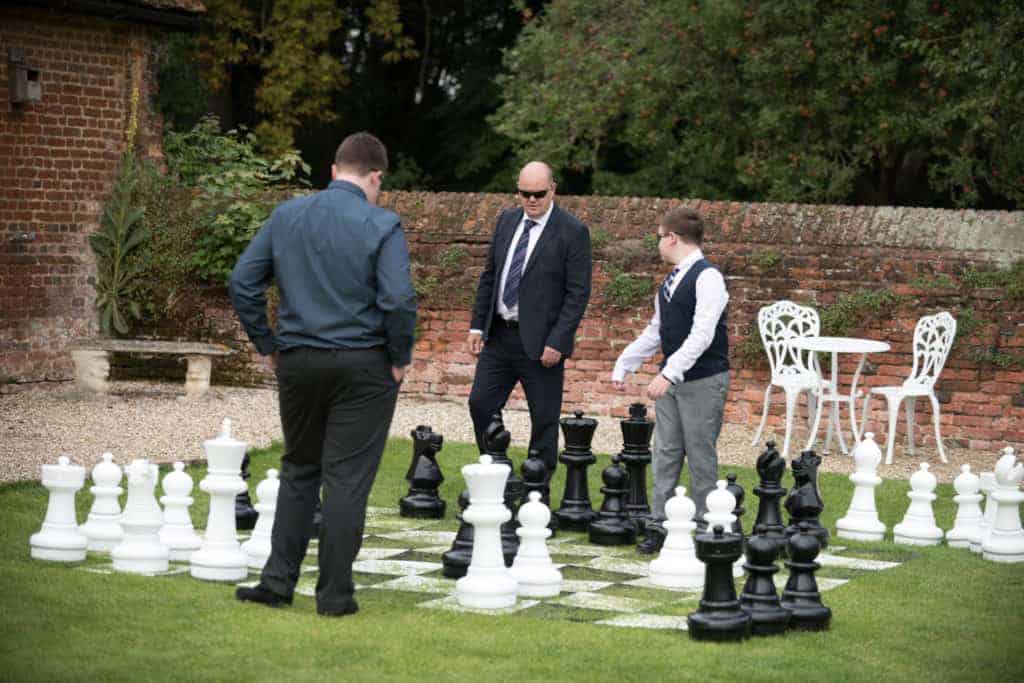 “We were conscious of making sure everyone was well fed on our day. We’d both been to weddings where we were starving by the time we sat down for food. The canapes were a great choice and kept everyone going until we sat down for our wedding breakfast. We are both big foodies and choosing the menu was difficult as everything on the menu sounded great. We decided on duck confit for starters, followed by roast leg of lamb. We had vegan and vegetarian alternatives which were just as delicious. We had raspberry cheesecake and sticky toffee pudding for dessert. Our fears were in vain as everyone mentioned how nice the food was but also how much there was, no chance of anyone going hungry” 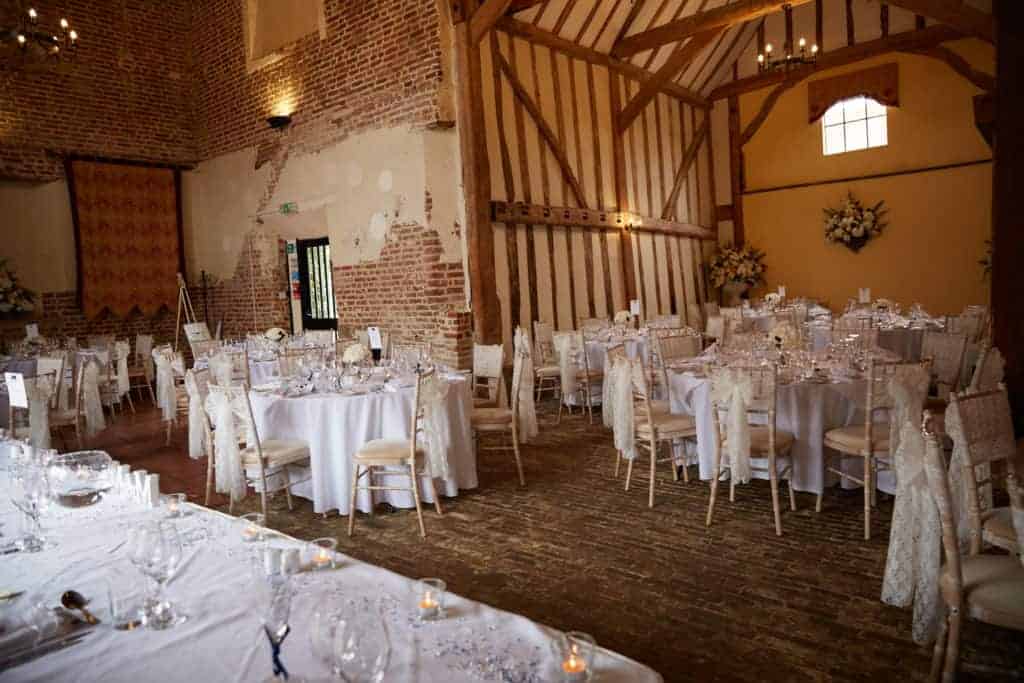 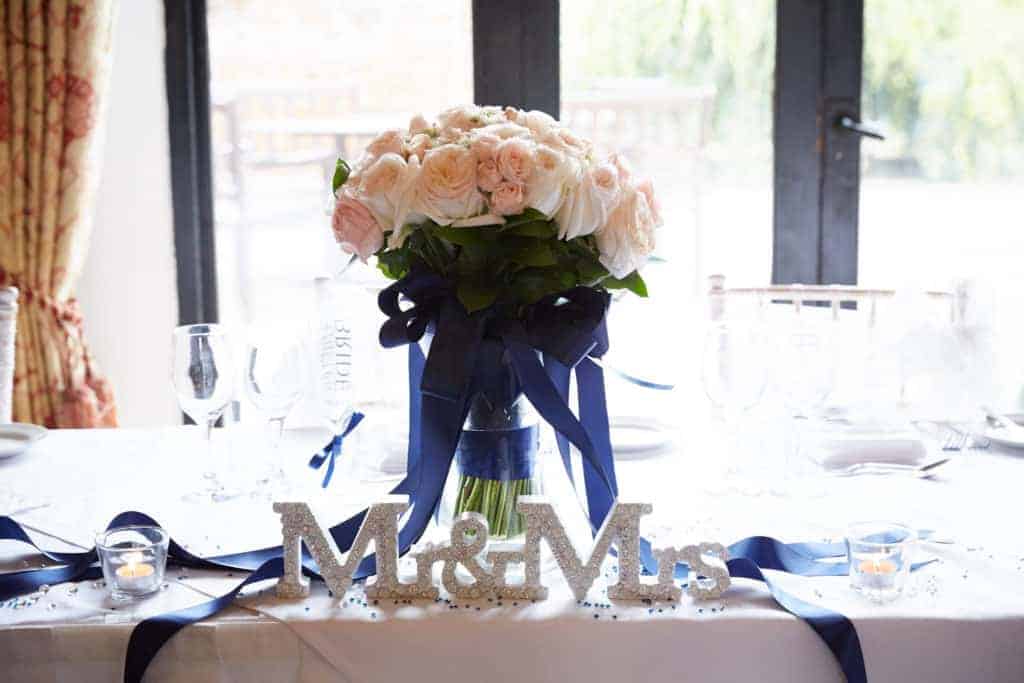 After the meal the guests made their way back to the house where they watched the cake cut, bouquet throw, first dance and let their hair down on the dance floor. 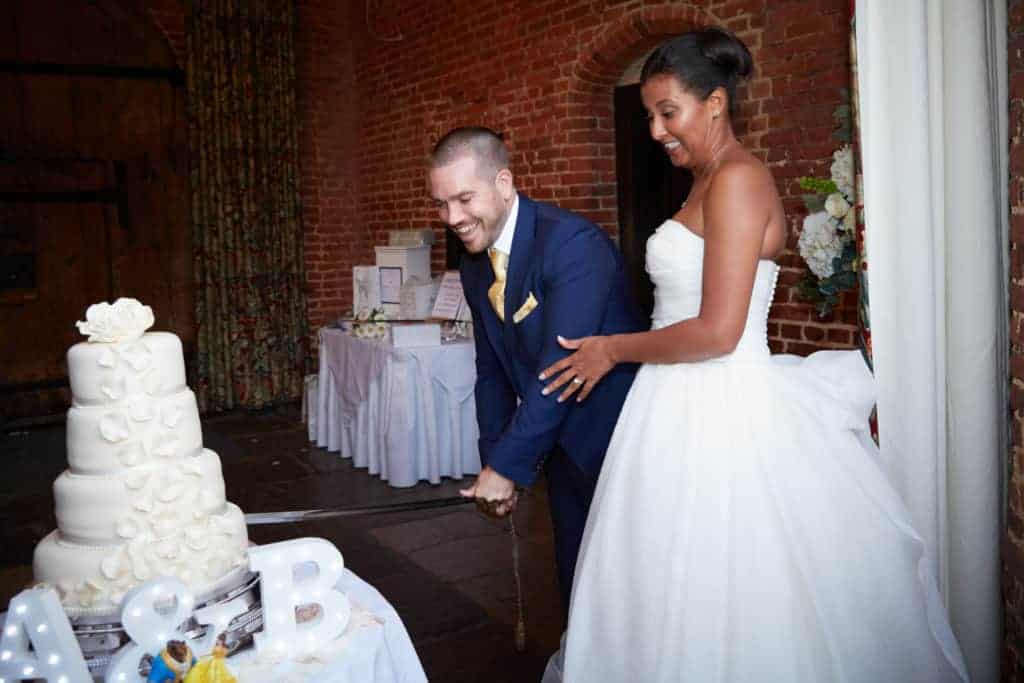 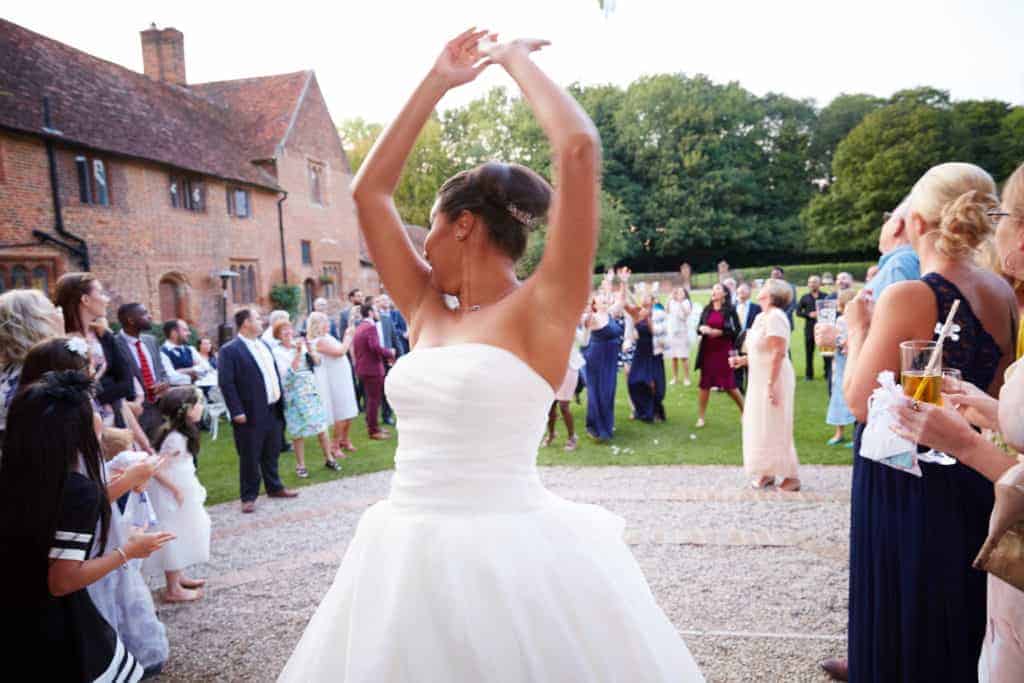 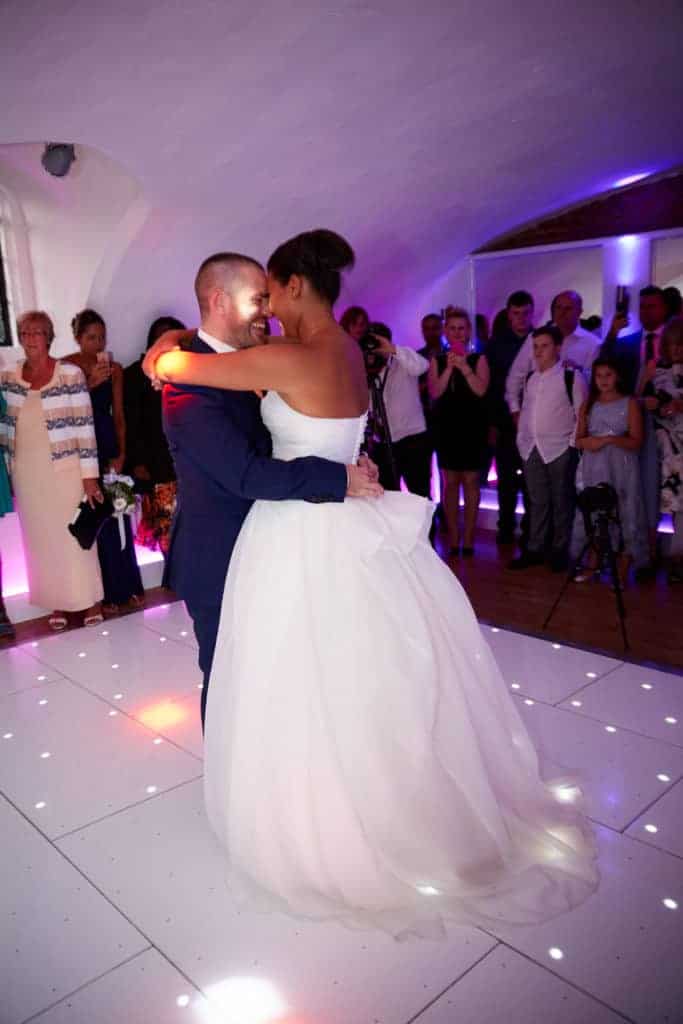 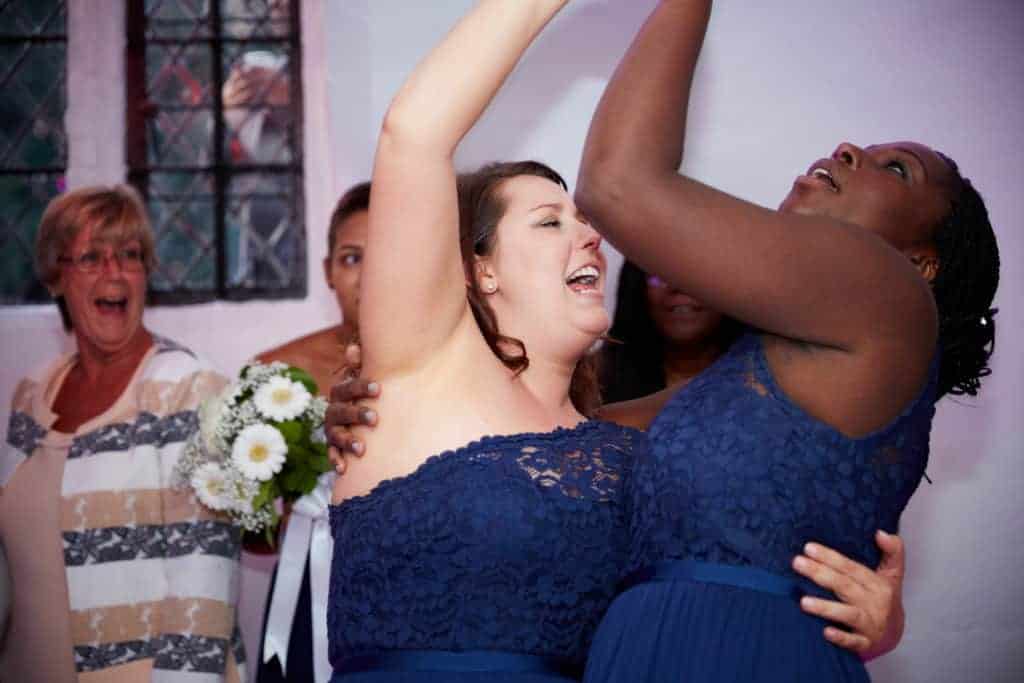 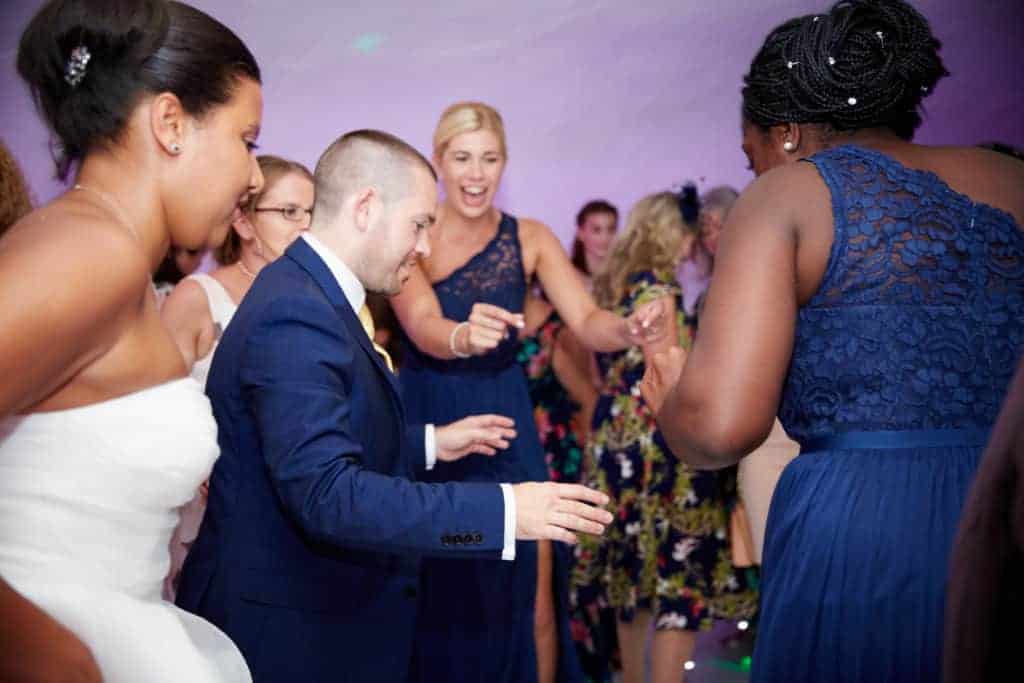 We asked Ben and Andrea to share their top tips to help all of our future couples plan their weddings:

“If we could do it all again, we’d make sure to get more photos of myself and the bridesmaids before the ceremony. It wasn’t until we got the photos back I realised I’d only had photos with my girls in our robes and not full dressed”

Ben is a primary school teacher, so they had to fit the wedding and honeymoon around the school holidays. They had a mini moon in Nice for a week and have booked to go to Sri Lanka. 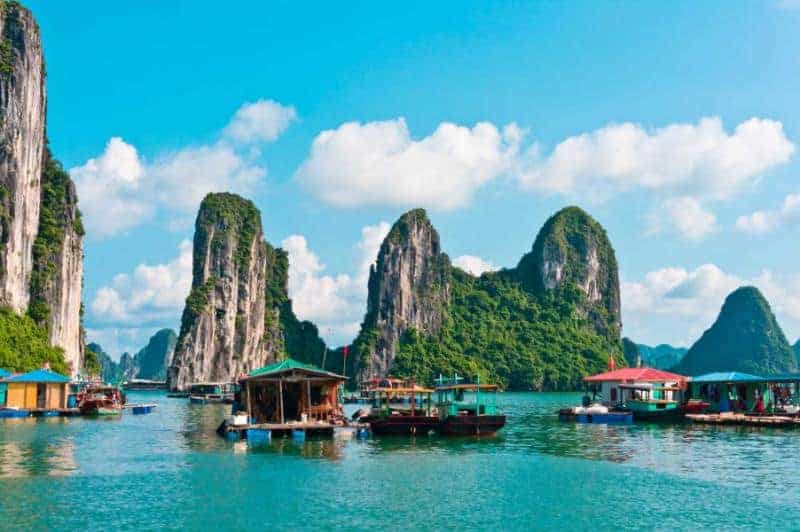