Home / Blog / The wedding traditions in for a revival

The wedding traditions in for a revival

Some wedding traditions are less fun than others. Events like the ‘cake smush’ aren’t universally adored by brides and grooms, for instance. British weddings are full of tradition and etiquette – Wedding Ideas’ A-Z puts a classic big day into perspective – and whilst trends are evolving towards a more personalised celebration, there are a range of traditions that are in for a revival.

In recent years the veil has been making a comeback, and this isn’t likely to end after the debut of Meghan Markle’s wedding ensemble this spring. Wedding veils were never ‘dead and buried’, but until recently most modern day brides opted to wear them as a hair accessory, not to cover their faces.

Traditionally the wedding veil was used to hide the bride’s beauty and to ward off evil spirits. The full, over the face veil is now more of a style statement than a spiritual defence! 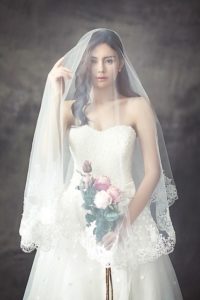 During the past couple of decades, the throwing of confetti has replaced the traditionally thrown rice or wheat. There is some debate over whether birds suffer from the throwing of rice, and some couples are choosing to throw rice (albeit organic) over man-made confetti. But where did the custom of throwing rice and wheat really begin? Curiosity explains:

“The custom began with the ancient Romans, and is meant to wish fertility for the newlyweds. Originally, Romans threw wheat, but soon afterward, rice became a universal symbol for fertility. (Imagine the conversation that went down when someone decided rice made more sense than wheat as a fertility symbol). In some versions of the tradition, the rice or wheat is eaten after it is thrown, which is meant as a compliment to the bride, but probably involves more dirt in your mouth than you typically want.”

It’s not just rice that’s thrown. The throwing material varies from country to country and from culture to culture. In Italy, guests throw sweets and sugared nuts at the bride and groom, whilst over in Morocco it’s raisins that’ll be flying towards the newlyweds. Whatever your material of choice, the throwing of confetti is one of the most memorable, picturesque moments of any dream wedding day. Be sure to check with your wedding venue about which materials are permitted though (we allow fresh petals outside and paper confetti inside).

Thinking outside the box is what today’s highly personalised, unique wedding days are all about. Applying creative touches to find your something old, something new, something borrowed and something blue is also a must. A tradition originating from the Victorian era, this wedding based scavenger hunt has become a great way to add further creativity to wedding ensembles with family heirlooms and new purchases all providing their own inspiration. Don’t forget to fulfil the last part of the rhyme by placing a lucky silver sixpence in your shoe!