There are many customs and superstitions associated with weddings. In the past a wedding was seen as a time when people were particularly susceptible to bad luck and evil spirits. Many originated or are modifications of customs which began centuries ago.

Some, such as the Bride wearing something old, something blue, or not being seen by the Groom in her wedding dress before the ceremony are known throughout the country and many other parts of the world. Others may be regional or even maintained within families from generation to generation.

These customs are maintained in the belief that they will bring good luck and happiness to the couple at a time when their lives are changing, hopefully for the better. 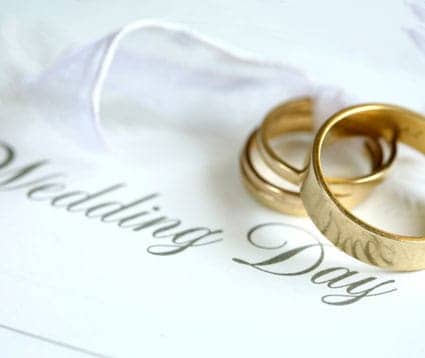 When we think of getting married, certain traditions seem to be engrained into our mindset- something old, something new, something borrowed, something blue and a sixpence in her shoe. The rhyme originated in Victorian times although some of the customs referred in it are much older.

The “something old” represents the couple’s friends who will hopefully remain close during the marriage. Traditionally this was an old garter which was given to the Bride by a happily married woman in the hope that her happiness in marriage would be passed on to the new Bride.

“Something new” symbolises the newlyweds’ happy and prosperous future.

The “something borrowed” is often lent by the Bride’s family and is an item much valued by the family. The Bride must return the item to ensure good luck.

The custom of the Bride wearing “something blue” originated in ancient Israel where the bride wore a blue ribbon in her hair to represent fidelity.

The placing of a silver sixpence in the Bride’s shoe was to ensure wealth in the couples married life. Today some Brides substitute a penny in their shoe during the ceremony as silver sixpences are less common.

When the Bride is ready to leave the changing room for the wedding ceremony, a last look in the mirror will bring her good luck. However returning to the mirror once she has began her journey will result in bad luck.

Seeing a chimney sweep on the way to a wedding is thought to bring good luck and it is still possible to hire one to attend wedding ceremonies. Other good luck omens when seen on the way to the ceremony include lambs, toads, spiders, black cats and rainbows.

Seeing an open grave, a pig, a lizard, or hearing a cockerel crow after dawn are all thought to be omens of bad luck. Monks and nuns are also a bad omen. This may be because the are associated with poverty and chastity. They are also thought to signal a dependence on charity by the newlyweds.

Bad weather on the way to the wedding is thought to be an omen of an unhappy marriage, although in some cultures rain is considered a good omen. Cloudy skies and wind are believed to cause stormy marriages. Snow on the other hand is associated with fertility and wealth. After the reception the Bride throws her bouquet back over her shoulder where the unmarried female guests group together. Tradition holds that the one who catches the bouquet will be the next one of those present to marry.

A parallel custom is for the Groom to remove the garter worn by the Bride and throw it back over his shoulder towards the unmarried male guests. Again the one who catches it will be the next to marry. After the wedding, the Bride should enter the new marital home through the main entrance. It is traditional for the Groom to carry the Bride over the threshold when they enter for the first time. The reason for this is uncertain. One explanation is that the Bride will be visited by bad luck if she falls when entering.

An alternative is that the Bride will be unlucky if she steps into the new home with the left foot first. The Bride can avoid both mishaps by being carried. A third explanation is that it symbolises the old Anglo-Saxon custom of the groom stealing his Bride and carrying her off.

So whether you believe in tradition or not, I bet that it will make its way into your wedding somehow!